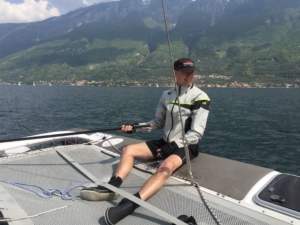 Christoph, thanks for your expert advice.  Before answering questions, please give us the basic preparations for docking a trimaran in the harbour:

Number 1: The boat is very light, so you should think in advance even more than usual.  Know where the wind is coming from and know where the current is going.  A performance trimaran will be taken by the wind more easily.

You’re planning in advance, so don’t dock bow-in even into the wind. When the wind is coming from the dock, you’ll ideally plan on docking stern-in. The boat follows the power of the engine every time in a lightweight trimaran. So keep the power at the leading end of the boat (stern-in in this situation). It’s also far easier to dock stern-in for beginners, especially as they can see the engine. If you’re tying up side-to, do the same thing: move along-side the space and shimmy (or drift) onto the dock using the engine to keep you in place, and the engine+rudder to control the lateral motion toward the dock. 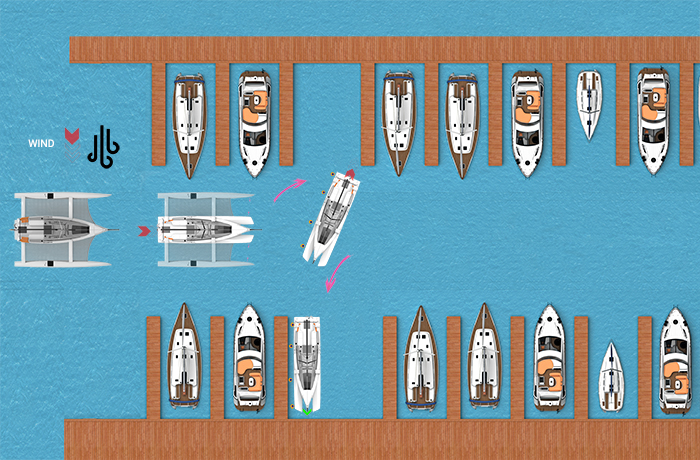 The wind is blowing you off the dock

And if the wind is from behind or blowing you onto the dock?

Exactly the opposite. The engine needs to act like an anchor – it needs to be to the wind. So the bow goes into the dock, and you use the engine to control your speed and angle. Move in slowly and just be aware of your bowsprit. 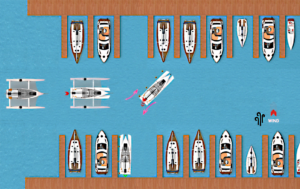 The wind is blowing you onto the dock

2.  What are the big differences between docking the different Corsair models?

The big differences between docking the various models is between the aft-cockpit models, and the aft-cabin versions. In the aft-cockpit versions ranging from the Pulse 600, to 760’s, and older-versions like the 28, there is no outboard linkage between outboard and rudder. So YOU must be that link – literally you have the outboard in one hand and the rudder in the other.  You need to move them simultaneously. This means docking stern-in is even more important. And you’ll need to be standing to dock.

The new Corsair 880 has a generational improvement on the outboard linkage (see image). That will make docking the new 880 easier as the helm will feel in control. You have a more elevated position, and a bigger place to put a big fender at the stern (perhaps tied on the dock). So although the stern of the boat looks taller and flatter in a completely modern trimaran like the 880, the docking situations we’re talking about are where it comes in really handy. 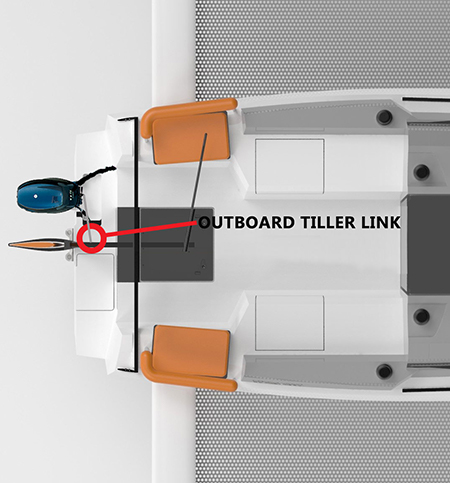 Now you’re approaching the dock so I’m thinking about some of the pitfalls! It’s also important to know that the stainless steel eyes used for tying the bow nets and wing nets are NOT used for docking lines – especially on the smaller models. You might use them for extra fenders – that can be useful because fenders on trimarans can ride up the dock and pop out. So it is useful for some extra fenders (anyway, be aware of that when attaching fenders). But don’t use the stainless eyes for docking lines – they’re meant to tension the nets where the forces are applied from a completely different angle, and I regularly see them damaged from misuse as a dockline fixing point. It is especially true on the smaller models where the eyes are obviously smaller as well.

The key difference between mooring a Corsair trimaran and something like a Seawind catamaran is in the use of the bridle.  A really heavy trimaran might not do this, but a Corsair is light enough to make forward motion just due to the windage of the boat itself! It will literally move forward over the bridle, anchor, mooring line, or whatever you’re tied to – sometimes resulting in loosening the anchor and starting to drift. So make sure the bridle is asymmetrical so that the boat wants to sit on a “tack” – this prevents the forward progression.  Also, take the daggerboard up. The daggerboard provides lift, so enables the boat to sail itself forward more efficiently. If you don’t know the waters, the sea bottom, and conditions, then do the opposite – Almost! Put about 20-25cm of daggerboard down because if the boat does drift and run aground its better for the daggerboard to run aground and catch on the bottom than for the boat hull to run aground. Allow the daggerboard to take the punishment because replacing that is a lot cheaper and easier.

Well in advance of approaching a mooring field, I take my own (the boats) bow mooring line and attach it through the clew at the bow. I run it outside the shrouds back to the cockpit. Then I manoeuvre the boat stern-toward the mooring and pick up the mooring line. I then feed the bow line through the eye of the mooring line, keeping the line in hand, and put the engine in neutral. Then I walk the line forward and attach the line to one of the floats – in effect making a bridle. This is a manoeuvre that, once you’ve done it a few times, really takes the stress out of mooring. With a second person, obviously they can do some of this running around. Even still I often do the initial stern-in maneuver because the routine is now perfected. It allows me to approach the mooring from the correct angle, with the engine and rudder in easy reach. And even better it allows me to slowly ease the boat into the mooring position I want – because the boat and engine did all of the work in advance.