The Corsair Nationals 2021 – Once again a huge success to the trimarans community!

Thanks to the Sarasota Sailing Squadron for accepting the challenge of hosting a Regatta in spite of Covid. The hurdles to host a successful regatta are many and the Squadron met them with aplomb. Part swap meet, sailing clinic, jamboree, and camp cooking tournament, the SBMR never fails to deliver when it comes to mild weather, warm clear water, easy launch/docking, and shore side things to see and do.  While the social events were muted compared to years past (to the relief of barnyard animals and first responders everywhere.  But thanks for keeping the tazers charged anyway, Craig), the racing was just as intense, the venue just as scenic, and the sailors just as salty. 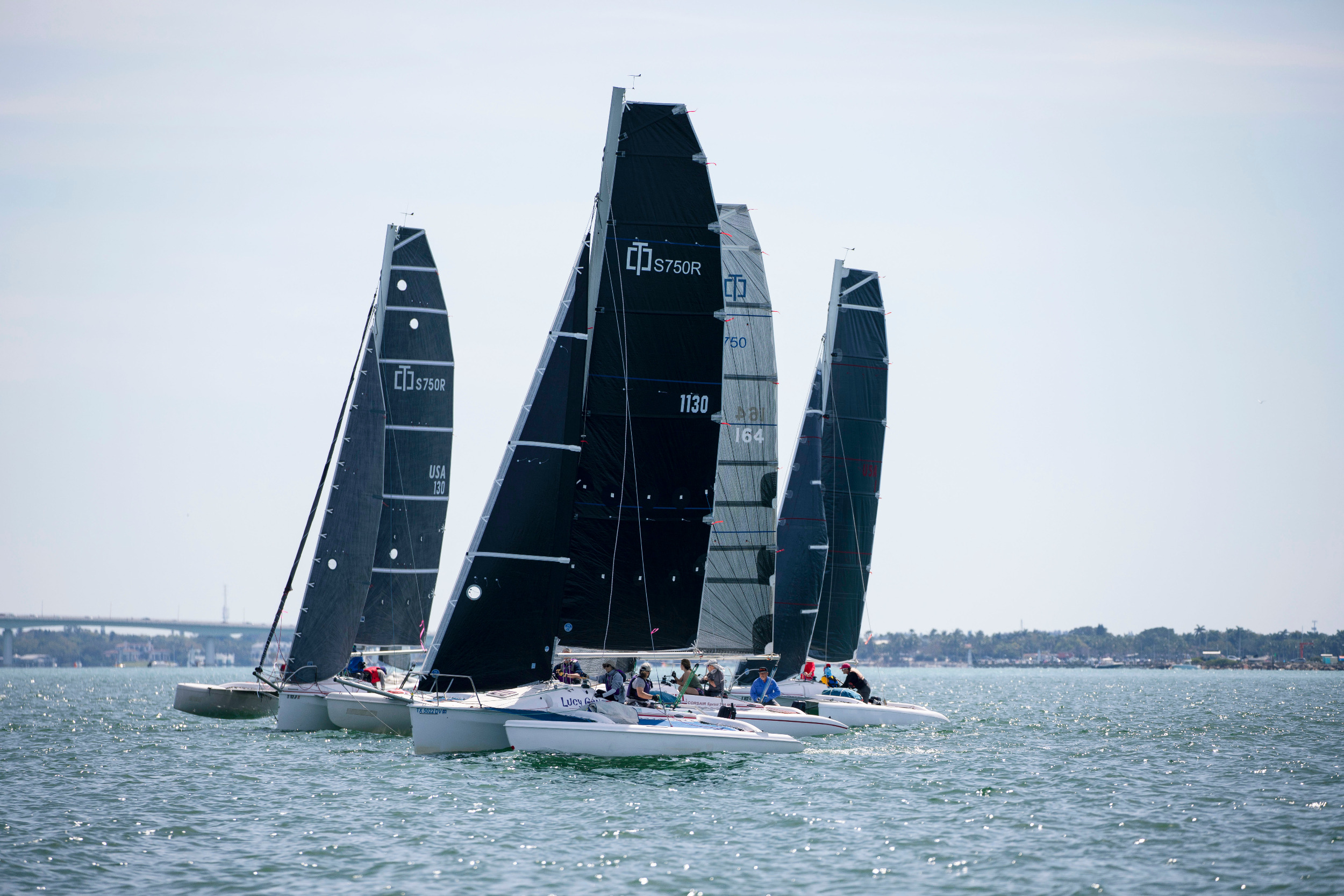 20 Corsair trimarans traveled from near and far to be part of this event.  As promised, the weather machine was set on “shuffle” and divvied out conditions from near calm to “should we reef?”.  Sarasota bay being protected on all sides makes sailing near the upper design limits somewhat predictable which helps expand your performance envelope. Seven races over three days kept sailors on their toes and the chiropractors in business for certain. 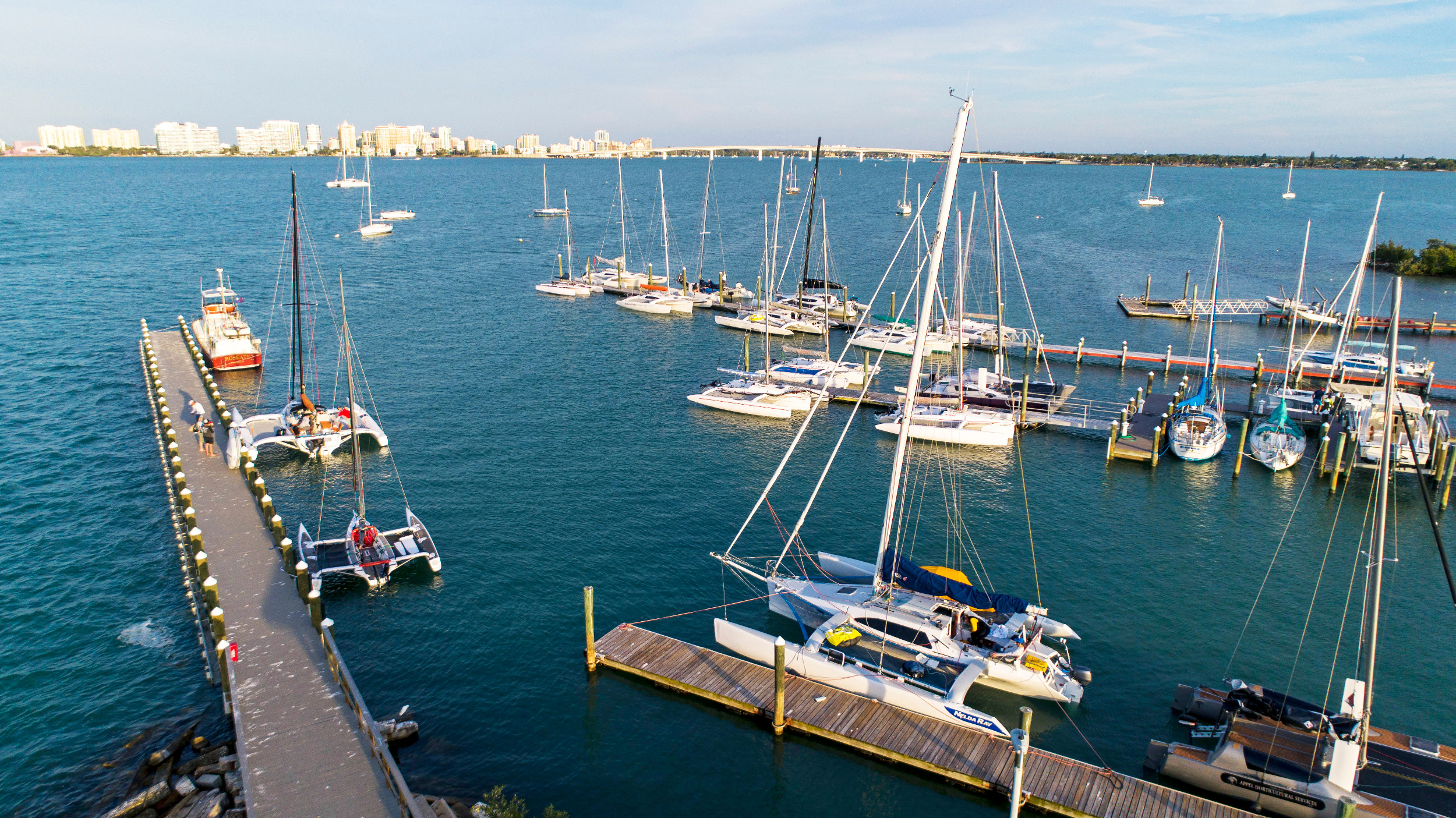 Typical of springtime pre-frontal passage in Florida, the first day dawned with a decent land breeze that was destined to quit right around first flag.  It was a lively 3 mile sail to the course from the dock with all the boats making their last adjustments.  Bad time to realize you left the beer cooler on the dock.  Fire that dude.

The race committee tried valiantly to run a race despite all the indications that this would be a drifter with large shifts and holes.  It was great light air sailing all the way to the giant hole at the top mark.  Hat Trick’s private breeze was not received well by the other sailors showing negative vmg.  Mercifully, the PRO announced the race abandoned as the breeze showed signs of backing 120 degrees.  Reaching to C-gate would have been an interesting twist.

A side note about the neat technology on the course this weekend.  The race committee used autonomous turning marks which kept station via GPS and other remote controlled wizardry, making minor adjustments to keep the course windward/leeward at all times.  Definitely nice to see a technical solution to assist mark boats in their challenge to keep the course and lines square.  Race Qs app is a crowd-source regatta tracker which has a lot of cool features.  Load it on your phone, set the start time, and the app does the rest while you’re sailing.  Replays later can be edited to add marks/starts, weather conditions, and group boats by fleet.  Displays can include VMG, SOG and a host of other data.

So, while motoring back to the committee boat to organize for race #2, the little “mark-bots” (think ) were busy scurrying across the bay to set the new course. 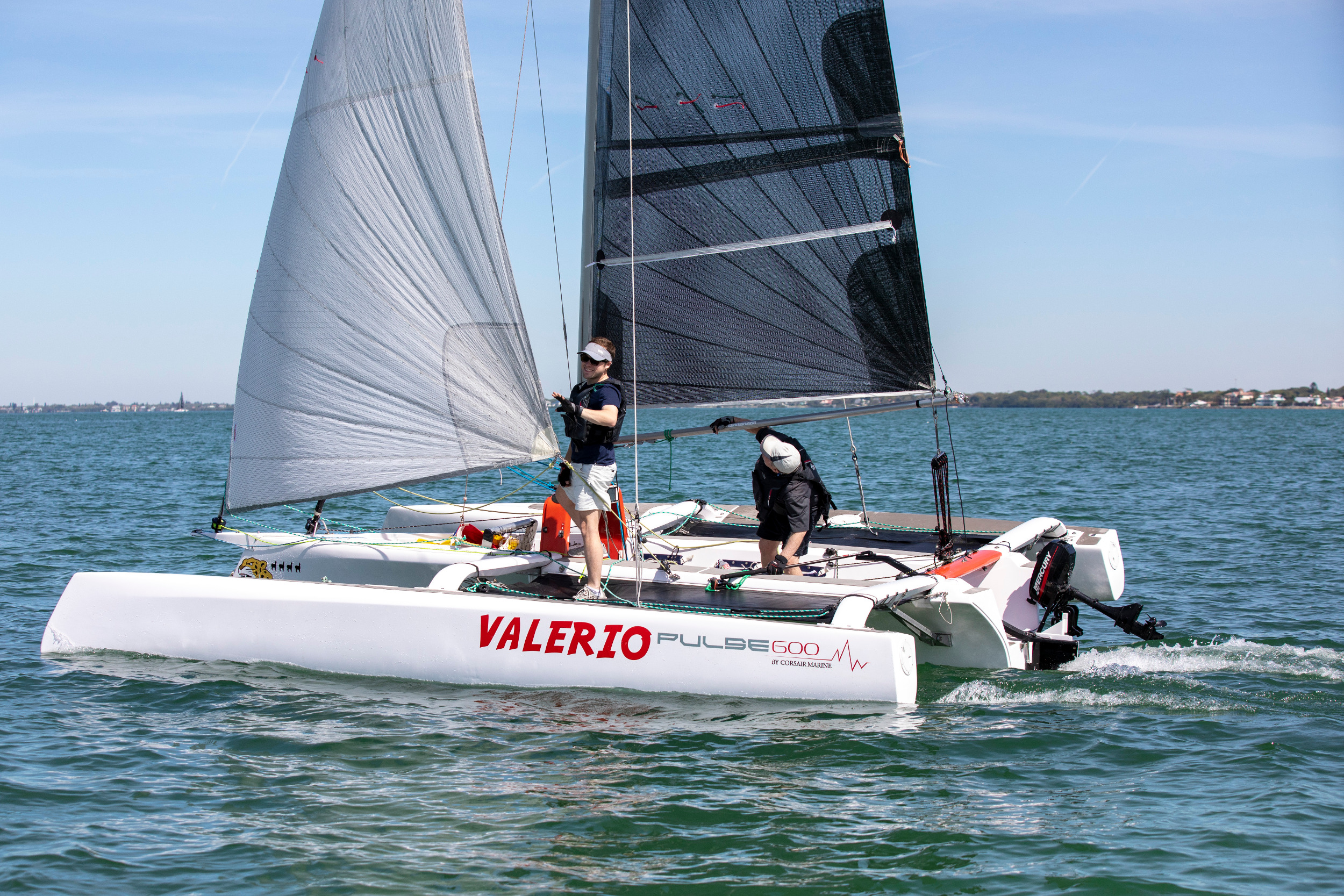 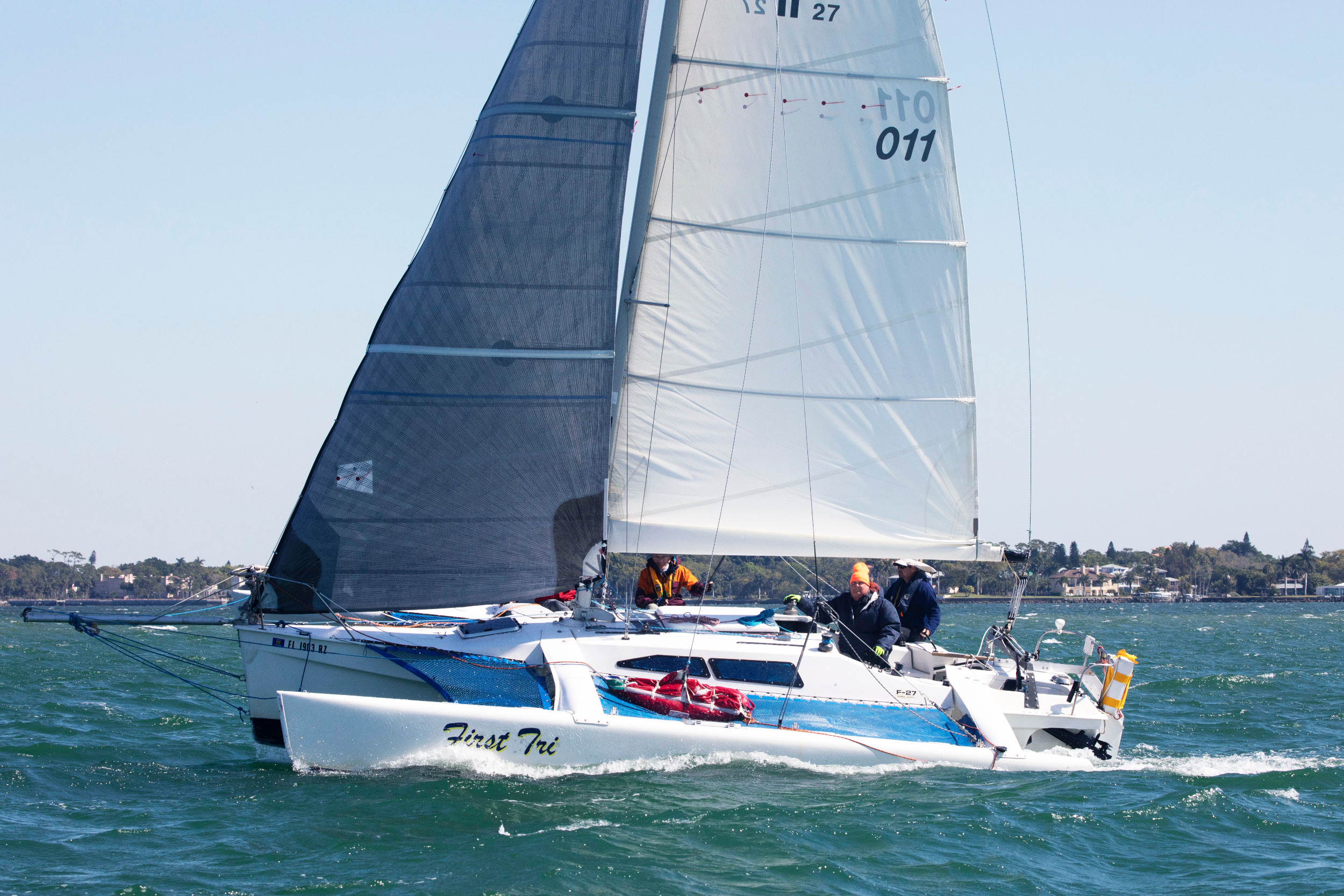 Races 2 and 3 were ideal with the seabreeze filling in to a moderate 10-12.  Races were tight, and little mistakes could add up big to those who were caught unawares.  A great first day to sort the boats out.

Saturday was forecast to be rainy and cold (high 60’s) but the PRO pushed on to get some races on the books in case Sunday turned into a blowout per the forecast.  The wind held for the most part in the 10-12 range, but the rain showed up and ended the day after 2 races.  Of course, after all the boats were tied up at the Squadron the clouds broke, the sun shone brightly, and the wind steadied at 14…  Second guessing never works

Sunday could be considered by many as “sporty”.  Clear and cool (upper 50’s to 70 by midday) with winds initially in the 18+ with gusts to 25 range.  Definitely nice to be sailing in protected water in conditions near your design windspeed envelope. If you’re going to build your sailhandling confidence, this is the time and place to do it.  No epic wipeouts or crashes, but there were some difficult spinnaker sets and drops in the conditions.  Races 2 and 3 were conducted in a bit more settled conditions with wind dropping to 10-12 with gusts in the mid-teens. Definitely tests your ability to shift gears to lighter conditions. 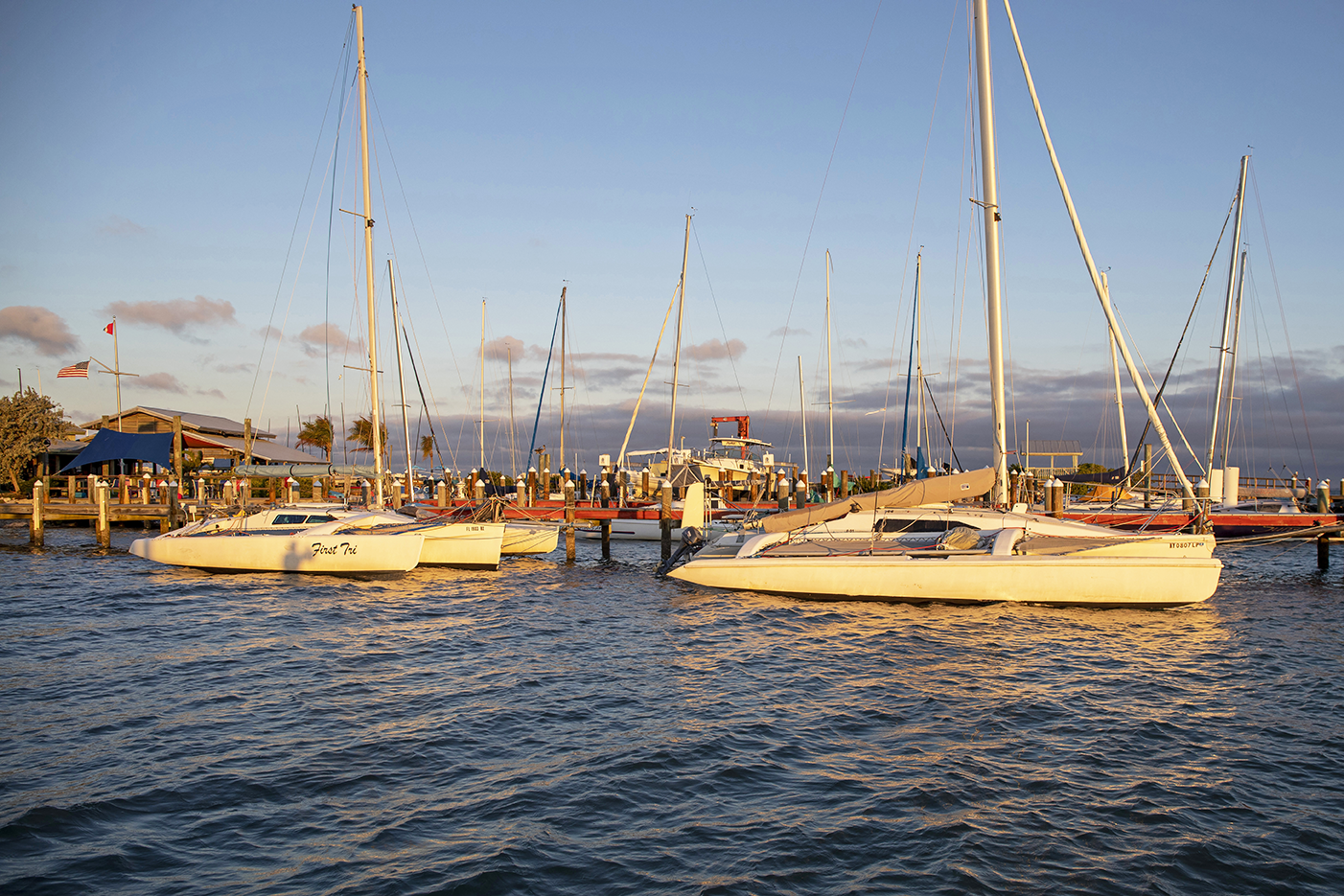 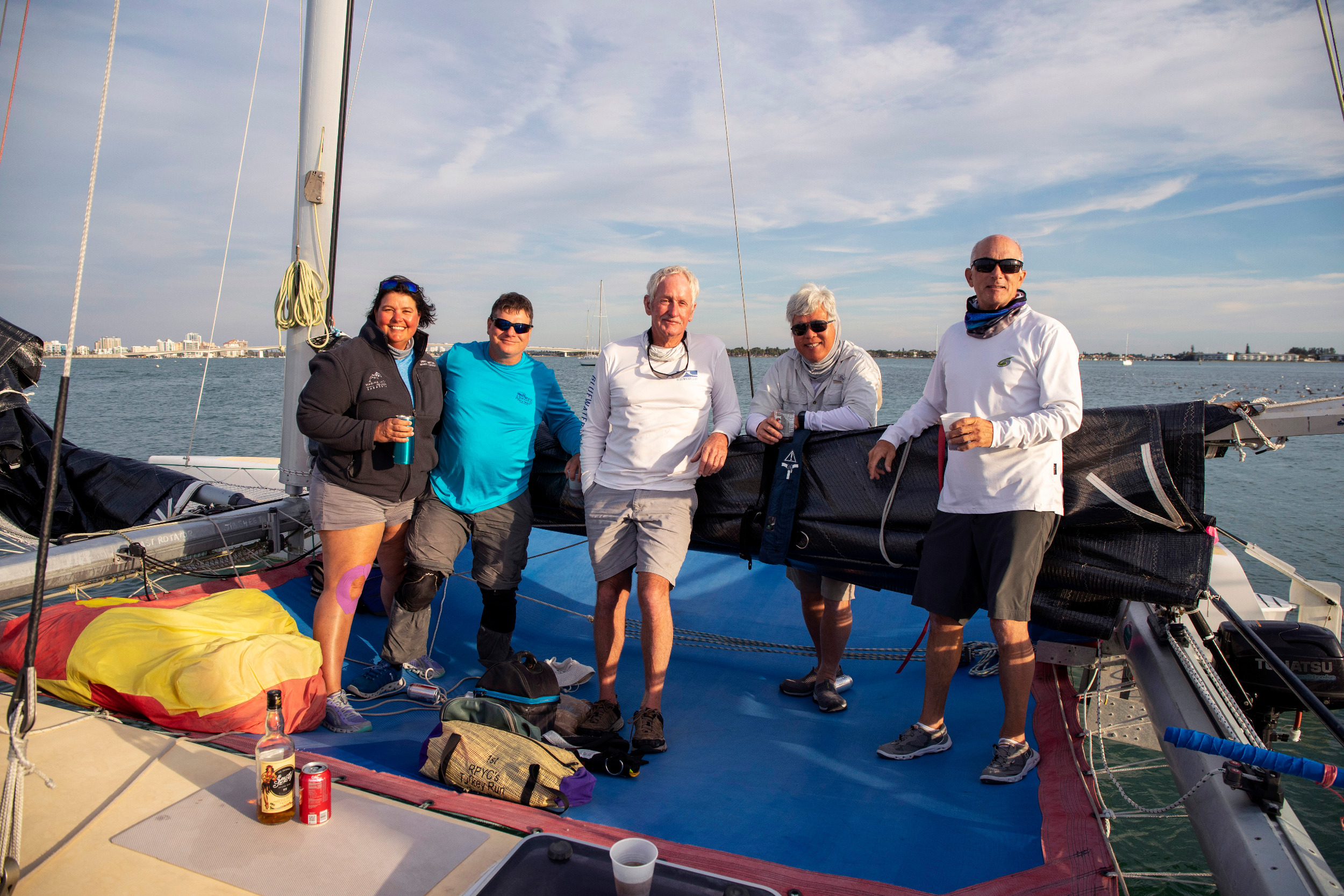 Overall, the Corsair course had high and low PHRF classes and the growing and incredible competitive did I mention growing 750 fleet.   In the 750 class, Hat Trick (first time on a race course with excellent prep by the FinishLine ) started with four bullets with Phil Styne brining his winning crew Todd Hudgins from the Nationals win in New England in 2008?  and highly experienced Corsair sailor Tom Reese to do battle with perennial  winner in the class Larry Geller.  Humility (Austin TX), Lucy Gene (Austin TX) and Tri Polar weren’t going to let either of those two hooligans get away with any slacking, and finish positions were traded often during the busy weekend.

The overall Corsair Nationals trophy went to Kathyrn Garlick on C 28r Evolution who sailed most of the last day with a torn main. Second overall was newcomer Alan Moore C 28r. Third was Larry Geller Sprint 750 beating out the 750 class winner Phil Styne with the overall time scoring system. 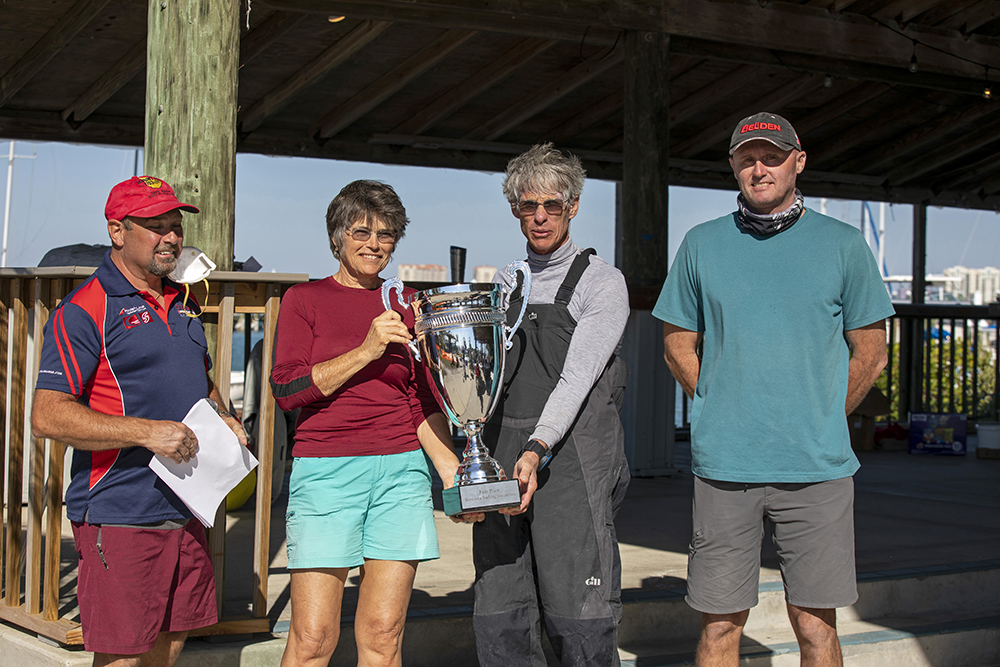 The overall Corsair Nationals trophy went to Kathyrn Garlick on C 28r Evolution who sailed most of the last day with a torn main. 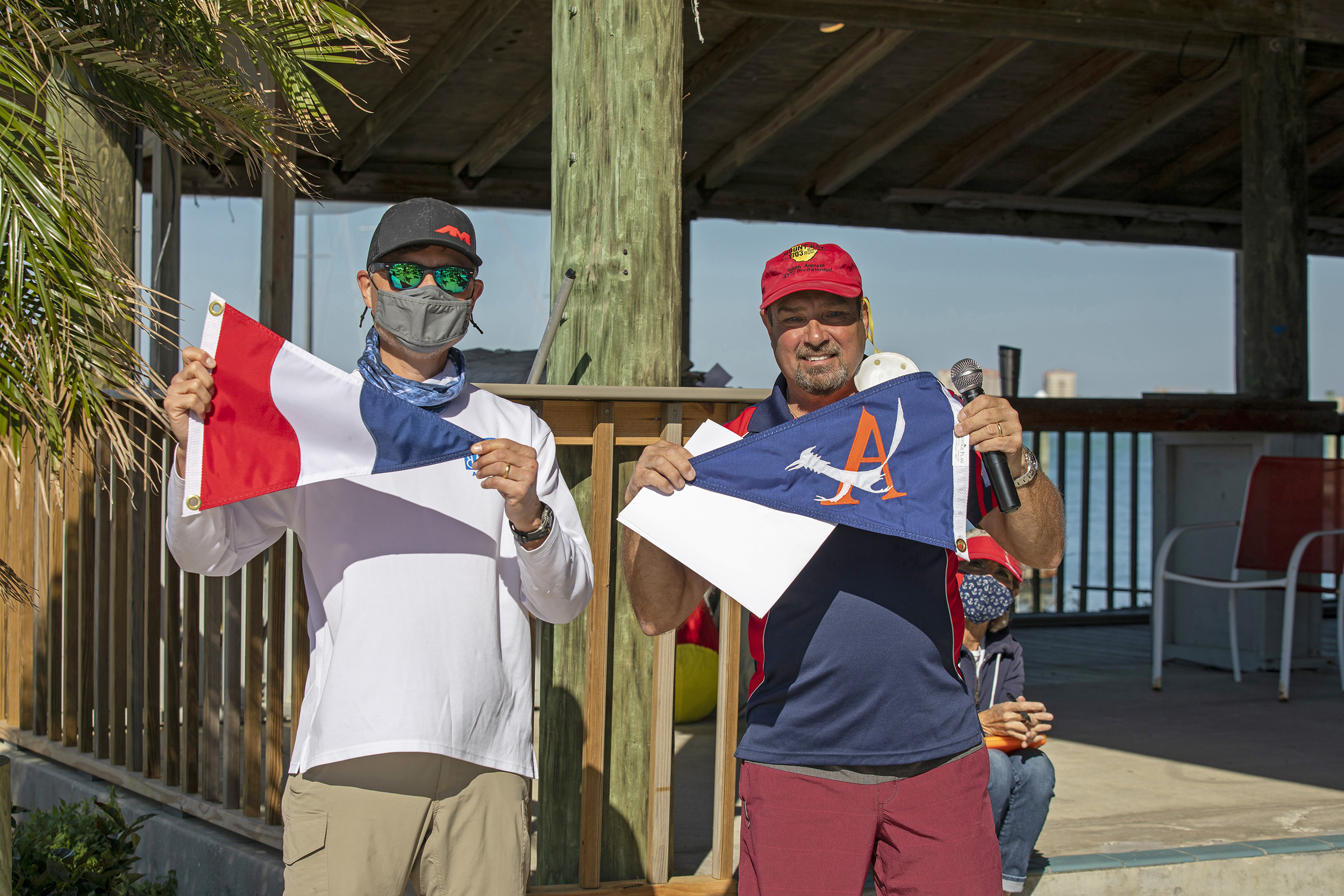 There were old timers (I have had some Corsair or another for 29 years) and one boat was literally picked up by its new owner the day before the regatta and stopped by on its way to its new home in Wisconsin to put on a good showing.

Sarasota Sailing Squadron as always was a great venue in-spite of missing the big dinner.

There was sponsorship by Corsair and The FinishLine.

Special Thanks to Jim Bergoin, Billy Black and Mike Cantalana!